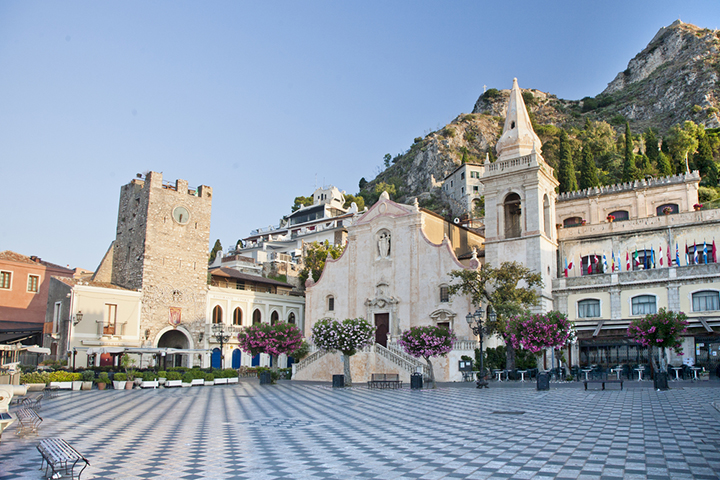 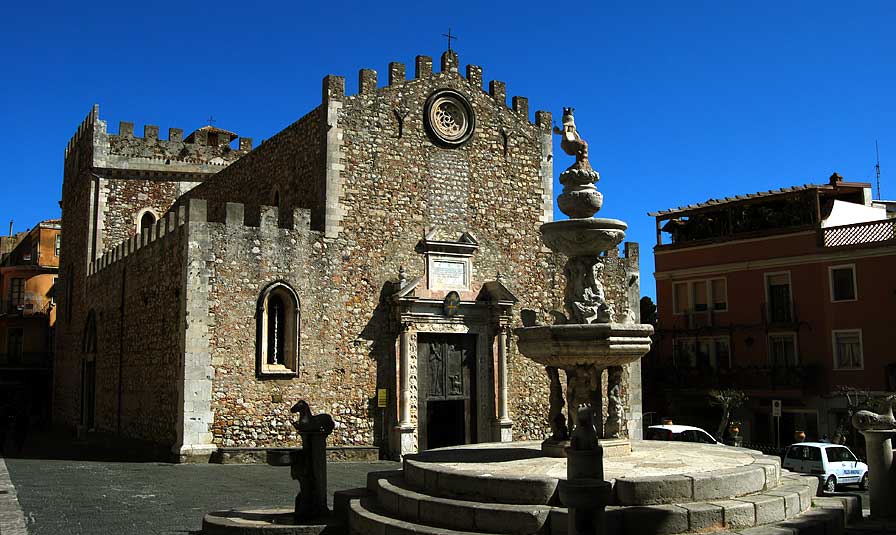 Write a review Review
THE DOME

The fortress Duomo, considered as Taormina’s main cathedral  , was built around the fifteenth century on the ruins of a small mediaeval church. The Duomo has a Latin-cross plan with three aisles and  six minor altars in the two side aisles. The nave is held up by six monolithic columns, three on each side, in pink Taormina marble and their capitals have a foil and fish-scale decoration. The ceiling of the nave has wooden beams supported by carved corbels reproducing Arabian scenes with a Gothic air. The very interesting main portal was rebuilt in 1636 and has a large Renaissance-inspired rosette sculpted on it.

The church consecrated to the Patron of Taormina, St. Pancras, Bishop and martyr, was built on the ruins of a Greek temple dedicated to Jupiter Serapis. Parts of the temple’s cell can still be seen in the southern wall of the church. This church is in Barocco style and dates back to the second part of the 16th century. Its main portal is very interesting with jambs and architraves in Taormina stone; two Ionian columns decorate each side of the portal. Inside the church the intermediate floor with the organ can be seen above this portal. Two interesting oil paintings on canvas hang above the two minor altars on the right of the church, one picturing the torture of St. Nicone and the other the consecration of St. Maximus who was St. Pancras’ successor. Between the other two minor altars on the left of the church there is a fresco picturing Teofano Cerameo, Taormina’s last Bishop during the 11th century. A low railing in wrought iron separates the rest of the church from the main altar which is lavishly decorated with polichrome marble slabs and an Ionian column on each side, like those on the external portal. There are eight angels on the altar, four on each side, and a bust of God giving his blessing. A fresco picturing the torture of St. Pancras can be seen on the right of the main altar.

The exact construction date of this church, consecrated to St. Catherine of Alexandria in Egypt and located in the centre of the town opposite Palazzo Corvaja, is not known. It is thought to date back to 1663, the year engraved on the tablet of the ossuary found outside the church and now located in the wall beside the staircase which leads to the crypt. The entrance door to the sacresty is on the left of the portal; the sacresty is thought to have been built before the Church, i.e. during the 16th century. The facade of the sacresty is decorated with two small windows ornated with sea shells, the same decoration used on the architrave of its door. As it was built on the ruins of the Odeon, the remains of which can be seen behind the church, part of the orchestra and scene were destroyed. The scene of the Odeon is believed to have been created using the colonnade of a pre-existent Greek temple dedicated to Aphrodite.

St. George’s Anglican Church was built in the early 1920s on the iniziative of a small group of English people who used to spend most of the year in Taormina. The church was designed by Sir Harry Triggs, an English architect and the son-in-law of Sir Edward Hill, who owned the land and was a real promoter of Taormina’s wonders. There are two aisles inside the church, which is divided by three round arches in Siracusa stone with two central columns as their base. The most beautiful part of the church is its large polichrome window behind the main altar picturing Jesus on the cross with St. Catherine on the left and St. George in his mediaeval armour on the right.

The Church of St. Augustine, nowadays known as the town library, was built towards the end of the 15th century by the people of Taormina and is said to have been originally devoted to St. Sebastian who had worked a miracle and saved the town by keeping the plague away. The Augustinian fathers later arrived in Taormina, took over and enlarged the church, turning it into a monastery; it then lost its St. Sebastian title and was named after St. Augustine. The church, with its tie-beam cieling, has four niches on each side decorated with false Corinthian arches and columns. Originally decorated in late Sicilian Gothic style, the church was radically transformed around the year 1700 when the large ogival arch of the main portal was replaced by an architrave in Taormina stone. All that remains of the originai facade is a small rosette and the top of the ogival arch of the old portal.

SHRINE TO OUR LADY OF THE FORTRESS

Situated on the top of Mount Tauro, the Santuario Madonna della Rocca has perhaps one of the most beautiful and suggestive panoramas in Taormina. The shrine was built in 1640, taking advantage of the rock structure which forms a grotto there, and is still today one of the tourists’ favourite sight-seeing attractions. 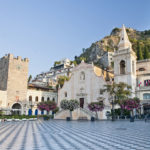 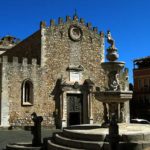 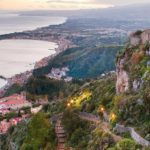